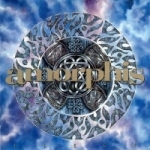 Even though Finlands AMORPHIS originally started out as a pure Death Metal act in their early days they usually wouldn’t get a mention in VOICES anymore these days as they have chosen to walk a different musical path over the years… It was actually this album back in 1996 that lead to my decision not to follow their career any longer, as I wasn’t prepared for such a drastic change of style after their incredible “Tales From The Thousand Lakes” masterpiece. Tomi’s deep Death Metal grunts got reduced to a minimum with the addition of new frontman Pasi Koskinen, whose unique sounding clean (not cheesy!) lead vocals changed the face of the band around quite heavily. I personally was totally disappointed and as a result didn’t give this album a fair chance… As far as I can recall there was already at least one re-release before (with the tracks off the “My Kantele” MCD as bonus material), but this one from 2004 is a little different (again). It comes as a digipak with a nice silverprint logo and has a couple of live bonus tracks instead: ‘Better Unborn’ (taken from a 1997 compilation entitled “Metalliliito”), ‘Against Widows’ and ‘The Castaway’ (both live at Isolaarirock July 12, 1997) as well as another live version of one of the band’s most popular tunes ‘Black Winter Day’, which for some strange reason isn’t mentioned on the sleeve though. While listening to the disc again after so many years, I finally discovered its real qualities and overall brilliance! Yeah sure, it ain’t the usual Death Metal style anymore, but “Elegy” turned out to be a really unique, Metal album with undenyable timeless qualities. The musical coctail that the band had on offer at the time was simply extremely creative and perfectly combined varies different influences. The basic songs come across like late 70s / early 80s Hardrock / Metal with very dominant, excellent dual guitar attacks. Just take standout tracks such as ‘Against Widows’ for example, or the middle part in ‘The Orphan’ which recalls classic THIN LIZZY, while ‘Of Rich And Poor’ has a MAIDEN “Somewhere In Time” kinda feel to it and the oriental melody lines in ‘Better Unborn’ and ‘Cares’ even remind on RAINBOW’s ‘Gates Of Babylon’. All this combined with clever incorporated death grunts (yes, they still used them here and there at the time), great harmonies and often very 70s like keyboard sounds as well as folk elements and a powerful production (Sunlight Studio) turn “Elegy” into an album that you shouldn’t ignore… if you’re open minded enough and not as ignorant as I originally used to be. More info at www.relapse.com.