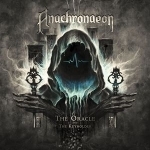 ANACHRONAEON
The Oracle And The Keyholder
(Stygian Crypt Productions)
42:52min

Swedish Death Metal. Exclamation mark, normally. To go out on a limb, i’d say there is no country on earth which provides such a huge amount of good music of every kind. And of cause Death Metal or in this case melodic Death Metal is one of those kinds. I guess name dropping would be unneeded for that matter. But having those old hands at your back, might make it difficult to shine out. So ANACHRONAEON decided to take a chance on overdramatizing the shit out of their music. Every time you falsely suppose it might get forward and somebody has to die soon, some weird synthesizer pops up, dramatic keyboards or sad clean vocals. I am aware that a huge gang of Metal heads is into that kind of romantic outbreaks. That’s why MTV came up with orchestras in Metal. But maybe I am not progressive enough to get this. “The Oracle And The Keyholder” starts not that bad, with a few chaotic bars which seem kind of auspicious. But you can count down to that break where they begin to draw burning unicorns on a creepy airbrush landscape. That continues pretty much the whole LP through. Technically ok done ANACHRONAEON rumble from one slathered part to another. In between you find some shimmering moments once in a while. Dissonant double picking, snotty blast or mid-tempo parts for example. But then again the airbrush picture and all the sadness. But of cause my prejudiced opinion means nothing. So check it out on your own! www.facebook.com/anachronaeon, www.stygiancrypt.com