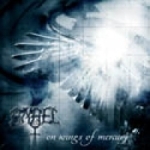 German Occult Black Metal battalion ANAEL returns with their second album after the strong debut ”Necromantic Rituals”. You can’t compare ”On Wings Of Mercury” with their first output as this second attack sounds more varied, more mature, even more modern. ANAEL today can be compared not only with SAMAEL, but also the name TIAMAT comes to my mind. The overall sound is powerful and every instrument is audible. Besides the power-riffs which got more Heavy Metal – inspired there is also a big development of the leads, which sound more melodious and are responsible for some darker creation of moods. Also the bass guitar is well-played and has got some very strong moments, especially on ‘Where Silence Echoes’. The lyrics are dealing with different occult topics; the Crowley inspired ones are still more than a deception. Even more certain is the use of the ‘Necronomicon’, just listen to the first words on ‘Marching Through Babylon’s Gates’. The main change on “On Wings Of Mercury” is the use of the vocals: as they have sounded more relaxed, deep and dark on their earlier releases they now sound more hectical and aggressive. Clean vocals are to be heard for the first time; at least they got my attention for the very first time. Especially on ‘Children Of Basz’ they sound irritating sometimes but also very good sometimes. Even if this is a very good and modern sounding album ANAEL lost some of their charm they got with their debut and especially their split LP with LUST! The CD version is to be released by Barbarian Wrath (GER) and the vinyl version by Iron Tyrant (ITA). www.anael.de