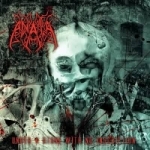 ANATA
Under A Stone With No Inscription
(Wicked World / Earache Records)
45:00min

I don’t like to fool around with the “masterpiece” term, but in the case of this record I can’t have such a problem. In fact, I consider this review totally useless except it gives me the opportunity to publicly state that “Under A Stone With No Inscription” is a landmark in the Death Metal history and so an essential purchase. I have rarely heard a so godly album within the last five tears. Let’s say that ANATA combine high musical skills with absolute catchiness, a pretty rare match you will certainly agree. Far from any trend, the four ANATA musicians have concocted a deadly recipe, staying faithful to their Death Metal roots while pushing the musical excellence to the highest level possible. The result is pretty logical then: ten ravishing tracks, where finesse meets technical prowess and sheer power. No sterile demonstrations and self-indulgence here and I simply can’t single out any particular track from the others, all of them are of the same high quality. Indeed I can assure you will listen this album from the beginning to the end never feeling the need to skip even only one song. If the metaphor of a metallic lace could trigger something in your mind, you will then perfectly understand what ANATA’s music is all about. The band started their career playing very competent brutal Death Metal the American way with a melodic European touch, but you can forget this era now, because ANATA have reached another dimension. No need to discuss any further about the excellent production or the cool layout, these elements are only the cherry on top of the cake. ANATA prove here that the Death Metal music is the superior form of music existing for now because of its limitless possibilities, and I thank them for that. Buy or be a loser.