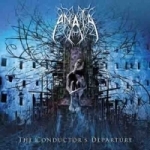 Since the day I discovered this Swedish band, with their second album "Dreams Of Death And Dismay", I never stopped being amazed by how they managed to create incredibly technical and at the same time original music without falling into the typical standards of Death Metal. The previous album marked a change in their style, going further into technique and dizzy riffs at a breackneck speed, leaving behind a bit their MORBID ANGEL influences from the early beginnings and reminding more on bands like GORGUTS, CRYPTOPSY or even more modern stuff like THE DILLINGER ESCAPE PLAN. Anyway, they still did it with a lot of originality and freshness, and, with this new album, I can only say the same again, ANATA is a band that should have gained more recognition, and I hope this will change; I already heard that they where the big surprise at the Maryland Deathfest this year, which was not a surprise for me. Going to what we were meant to speak about, "The Conductor’s Departure" shows a little progression from it’s predecessor, the production is quite similar and they didn’t change their style as much as between the two precedent albums, but they’ve progressed a bit more into progressive stuff (what a funny sentence), without meaning they are more technical, but more experimental and with a bit less of aggression in some parts. With that I don’t want to make you the impression that this album lacks of brutality, as you can find a lot of it here, but what makes ANATA special is the way they combinate all the elements into a unique form: you have blasting and fast parts, groovy and extremely catchy riffs (like in ‘The Great Juggler’), a lot of melodies (which by the way are one of the things that make them so special and different from other bands in the genre, as only PSYCROPTIC use them so much I think), grunting vocals, an excellent and clever drummer and songs where you can find new details every time you listen to them. Perhaps the only thing that didn’t manage to convince me are some especially progressive and instrumental parts that can be a bit boring comparing them the rest of the album, but these are very few and don’t make this piece of Metal less interesting at all. Go for it if you’re searching for something fresh and a bit different of the usual Death Metal of these days. www.earache.com.