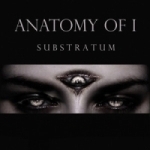 Michael Dorrian (on vocals and guitar), Steve (on bass) and Dirk Verbeuren (on drums) are ANATOMY OF I; an extreme Metal band that is full of musical experience from so many other bands and / or projects (no need to go into any specific details). ANATOMY OF I haven’t chosen the easiest way to be stumbled through; they at times blend both Death and Black Metal in such an extraordinary breath-taking way that one starts eventually showing an uttermost respect toward these three guys for their hard inputs for this band. In fact, if you have ever liked what Chuck’s DEATH did in between the "Human" and "The Sound Of Perseverance" albums – taking this more progressive sounding road for the band, then you’ll undoubtedly find lots of pleasure and enjoyment from "Substratum" as well. ANATOMY OF I introduce quite a slap of debut release, in which the band’s intention to put their Metal cauldron boiling the most steaming hotly, seems to have the correct recipe for getting noticed around the Metal loving community – even by a larger scale, I think. The band’s progressive Death Metal is truly well-constructed, being constantly in motion and having many different layers, just to keep things a little bit more interesting all the time. ANATOMY OF I’s music contains many same elements that Chuck Schuldiner used in the later of prog-ish DEATH – twisting, bending and connecting somewhat unorthodox song parts to each other, without fearing a bit at all whether the band would get a ‘progressive Metal band’ tag to be carried on for the rest of the band’s existence. Michael does basically the same with ANATOMY OF I, fearlessly keeping things on more of that progressive and tricky side of extreme Metal, skillfully using his visions and ideas for the advantage of his band – and succeeding in combining some of the better sides of both ends on "Substartum". Of course having guys like Steve DiGiorgio and Dirk Verbeuren in the same band line-up, have obviously pawed the way for Michael in order to reach all those goals with ANATOMY OF I that he has set for this record in particular. Everyone already knows what kind of demon Steve is whenever he grabs his 4-stringer for himself – and let him loose. Dirk is one heck of a drummer as well, maintaining this certain drive and beat for an album like the one in the very question demands for. All this – along with Michael’s dry, Black Metal snarls and his diverse guitar work, "Substartum" reaches easily many of those standards to be reckoned more than just a solid progressive Death Metal album only. Actually, this stuff is pretty stunning, believe me. www.anatomyofi.com