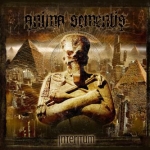 Symphonic Black / Death Metal from Bavaria, Germany? Anyone? Okay, hands down… I was just thinking this act might interest a small fistful of you at least – and I was right about that. ANIMA SEMENTIS is the name of this unholy union, and these apocalyptic looking German warriors have already released their debut album "Sermons Of Lies" in 2008. "Interitum" is the name of their new 3-track EP – and without talking any (or that much) bullshit at all, ANIMA SEMENTIS seem to know what it takes for being able to create respectfully done, symphonic Black and Death Metal. This isn’t bad at all; in fact it’s nice to notice that if you do something in terms of getting this symphonic element involved within your sound, it necessarily doesn’t have to be a crazily and mindlessly keyboard-driven effort, in which it’s basically the synths only that steal the main role in the whole musical palette. That’s not something that happens in ANIME SEMENTIS’ case though: the main role is played by Max’s and Michael’s heavy and oppressive Death Metal orientated guitar rolls, supported by both Marco’s and Max’s growls and shrieks. Most of the time the tempo is kept on a pretty fast level but some occasionally churned out breaks / stops here and there, seem to help to set their songs on a whole different, yet more interesting mood all in all. In a way it’s a bit odd to think why on earth no label has signed ANIMA SEMENTIS yet? I am sure with this much talent there’s in this German Black / Death Metal bunch, there should be some takers out there for this type of stuff, that’s for sure. More information on ANIMA SEMENTIS, fight your way to: www.facebook.com/animasementis