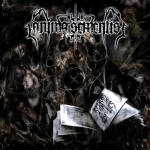 Wo-fuckin’-hoo… something here that is right up my alley: German Black / Death Metallers ANIMA SEMENTIS debut album, "Sermon Of Lies", has a nice Norwegian / Swedish vibe à la GEHENNA, MÖRK GRYNING and OLD MAN’S CHILD incorporated into it, added with something off DIMMU BORGIR’s "Stormblåst" album that I cannot put my finger precisely on. In other words – without saying it with a million of words, ANIMA SEMENTIS bring such hard yet unbeatable cards on the table that should have a fair size of domino effect on label owners to turn their heads towards this act, contract papers waiting to get signed by the band. ANIMA SEMENTIS have created a very captivating soundscape on their debut that harks back to some Norwegian Black Metal names specifically, of the 90s period of extreme Metal scene. Out of many other Black / Death Metal bands these days that seem to count on some trend-ish phenomena – strongly approved by the fans and media mostly, ANIMA SEMENTIS have chosen to turn their ship back to more storming and rude seas, sailing in those dark waters that separate men from everything else really. ANIMA SEMENTIS have absolutely earned some horns up for their achievements on "Sermon Of Lies". Be hailed ANIMA SEMENTIS – be forever hailed the elder times, too! ANIMA SEMENTIS’ darkened cave can be found at: www.facebook.com/animasementis