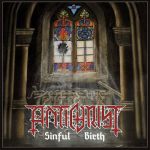 ANTICHRIST… A simple enough name for a Metal band. Almost too simple. A name that basically stands for everything that Metal’s about… blasphemy, power, death. Sweden’s ANTICHRIST, one of eight other known bands with the same name, one of two known Thrash bands with the name, have taken the name and claimed it as their own. The second full-length "Sinful Birth’ charges full-throttle into Thrash Metal glory. ‘Instruments Of Sadism’, an intro, sets the stage for ‘Savage Mutilations’, the arrival of rivet-smashing guitar fury set to shake the house down. Steken’s vocals are natural for the Thrash attack, as Filip Runesson and Gabriel Forslund shred their guitars as if their fingers were burning at every touch of the strings. Sven Nilsson pounds the drums in a furious haze as bassist Gobbe Henningsson maintains a steady rhythm complimenting every Metal second of this album. The vocals take a little break on ‘The Entity’, only showing up when needed. The circular mosh-infested ‘Under The Cross’ showcases a guitar solo at the speed of light. And if you want to destroy things, crank up ‘The Black Pharaoh’. Try not to drip too much blood on the nice carpet. ‘Sinful Birth’ rams its bestial head into the ribcage of God above before crushing his remains with a steel-toed boot. The fret-filled ‘Burned Beyond Recognition’ will make you lose your breath, while the marching ‘Chernobyl 1986’ sets the tone for final track ‘Fall Of the Temple Of Solomon’, which brings the album together in a lightning-fast thrashing frenzy. Here’s what I love about ANTICHRIST… They know Thrash. They have no interest in experimentation or kanoodling. They have no desire to let up in their assault. Here’s hoping for years to come of more crippling speed from these Thrash masters. For more info, check out www.militiaofdeath.com, www.facebook.com/pages/antichrist-swe/194267540607866, www.ihate.se