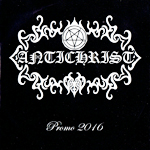 While volunteering to review this, I thought this was the Canadian ANTICHRIST that released the excellent "Sacrament Of Blood" in 2011. Big surprise it turned out to be the one from Peru. For those unfamiliar with this namesake, they hail from Lima and perform heavy Doom / Death in an occult and evil manner. Since the formation in 2004 they released three demos: "Decadencia De Un Redentor" in 2014, "El Angel Del Holocausto" in 2015 and "Demo Rehearsal III" in 2015. Vocalist Agalariept and drummer Sargatanaz used to play in BLASPHERION and performed on their demo "Letanías A Satanás" from 2003. This promo features 4 tracks, but still clocks around half an hour. The first two tracks sound different from the other two and seem like the main input. The track ‘Obscurantism’ reminded of MOONDARK and DISEMBOWELMENT because it’s drenched with downtuned heaviness. Despite the runningtime of eight minutes, the songwriting makes it seem shorter and there’s enough variation to find. The atmosphere is really awesome, it’s genuine obscure and occult. Big contribution to this are the heavy riffs and the dark, growling vocals. The second track ‘La Aflicción En El Nombre De La Fe’ sounds less heavy and was even slower. It reminded of CASTLE and BEYOND BELIEF (but my knowledge of bands in this register is pretty limited). The structure is pretty simple but it builds well and some elements make it seem like you’re witnessing a ritual. ‘Anticristus Erit Gloriam Sempiterma’ seems, because of the opening riff, more Black Metal. Soon it changes and falls within the same pattern like the other two. The production is very raw and inauspicious. A small letdown was the speedup that makes this creates utter chaos. It’s a tiny thing in an otherwise cool track. The outro steps it up even further and is so brutal that it can only be categorized as music because of the rhythm. This is an impressive release and fans of dark and heavy doom should take a listen. For more info check www.facebook.com/antichrist-1681206325489421