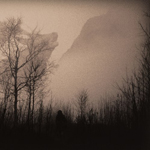 ANTLERS
A Gaze Into The Abyss
(Pest Productions)
39:06min

The darkness swells in the east! And fuck yeah, I am happy to review another upcoming band from that area, between surface mines and the otherworld. Which has been neglected for too long. At least when it comes to the unholy pact with the dark and its mysteries. ANTLERS from Leipzig (Germany) seem to be willing to enter that pact and establish themselves in the row of new and aspiring Black Metal hordes from the new Bundesländer. They definitely got what it takes to claim a place in front. “A Gaze Into The Abyss” has such a well conceived arc of suspense, it straight drags you roughly into an emotional maelstrom. You better don’t fight that epiphany. There is no doubt, you will lose that battle. And by that, you lose oneself. ANTLERS is claimed atmospheric Black Metal. But don’t worry, no tight jeans party, no puppy eyed adolescent philosophy, no king sized atmospheric assumptions. Instead, heavy melodic riffing in the tradition of Scandinavian blackness. Pushed by a drummer who constantly forbids you to take breath. And if you feel like you have those moments of seemingly rest in between the mid-tempo parts, actually you just have a moment to realize how deep into that somber abyss you already sunk. Because melodic guitars and dissonant sections alternate into a constant flux. Which makes it almost impossible to reach firm ground again. That insidious downfall is flanked by unexpected but therefore even deadlier harmonic guitar solos referring to Black / Death heroes such as DISSECTION or DAWN. It’s the tightness where ANTLERS excel. The whole package is with no mercy composed and with no compromises recorded. And the top of all that is by far the voice which leads the whole orchestra on a oily stream of doom. No chance to protest no chance of exemption. Get this and try to dive for 40 minutes! www.facebook.com/antlersband, www.pest666.com