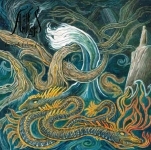 With a band name such as ANTLERS, it’s difficult to really envision the type of band they would be (the weird cover artwork, with no information anywhere at all – no logo, no titles, no nothing – won’t help you either – Frank). To be honest, I was expecting some form of Post Metal or doomy Sludge. And damn if I wasn’t surprised when what I was listening to was an atmospheric breath of Black Metal air. With only one other full-length behind them, 2015’s "A Gaze Into The Abyss", Germany’s ANTLERS deliver their follow-up "Beneath.Below.Behold", an album full of fog-filled mood and overbearing despair. ‘Theom’ begins with a rainy, acoustic intro below morphing into a shuddering landscape of pure Black Metal guitars, furious blast-beats and catacomb-dwelling vocals. ANTLERS waste no time in setting the stage for this act of hopelessness. ‘Heal’ thunders forward with a throwback to classic Black Metal in an almost anthemic array of glory. There’s not a huge vocal range throughout. But it fits just perfectly in the swirling mass of tracks on "Beneath.Below.Behold". The third track ‘Nengures’ slows it down a bit with acoustic guitars and weeping violins as a segue into ‘Beyond The Golden Light’, a fucking beast of a song which surrounds us in its breathtaking guitars which suck the life right out of you. The mid-tempo song bleeds bleakness. ‘Metempsychosis’ feels like it gallops in a field of lost souls, packing a punch without being aggressive. The female vocals which underlie the song are a nice touch. ‘Drowned In A Well’ leads into the next track with pianos as ‘Off With Their Tongues’ tramples the listener with a rage unlike anything else on the album. It’s just a damn powerful song. ‘The Tide’ steps back with a mid-paced track that strides and struts with a confidence to make the religious sheep bow down before it. And ‘Lug’s Waters’ ends the album with a guitar / piano combo which gently lays to rest 51 minutes of enveloping Black Metal which captures our emotions and holds them tight. For more information, check out www.facebook.com/antlersband, www.facebook.com/totenmusik