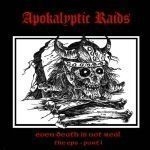 Brazilian Death Squad HELLHAMMER / CELTIC FROST worshippers APOKALYPTIC RAIDS have returned with an EP compilation of their previously released EPs and material from split releases. As a longtime fan of the band this is a perfect choice as I don’t have to look for all this material and it’s all in one place. A nice release while we await the next full length from these minions of Death. Diving into the album we get covers from the following bands: HELLHAMMER, SLAUGHTER (Canada, not that Glam Rock version from the USA), DISCHARGE, MOTÖRHEAD and HEADHUNTER D.C. If you have never heard of these bands then I highly recommend you start checking them out to get a better experience / understanding of the songs being covered. So, if you are familiar with APOKALYPTIC RAIDS then you know their sound and musicianship / songwriting is a reference to an earlier time when Death Metal was still a brand that few understood. It would be a “given” that they would cover songs from bands they were heavily inspired and especially the aforementioned HELLHAMMER / CELTIC FROST. The HELLHAMMER tracks speak for themselves and are well done (I mean how can you base your entire sound on them and not do covers of their songs justice, right?). The SLAUGHTER cover was an interesting choice considering all the other choices they could have gone with but nonetheless it was sharp and added a bit of spice with the vocals. The DISCHARGE cover reminded me of high school when I first heard the band and could not help but just really dig this track. MOTÖRHEAD’s ‘Sacrifice’ was on point and really stood out on this compilation. Lastly we get the HEADHUNTER D.C. cover, boy this song was easily the third song I enjoyed most on this album. Overall, this is an excellent compilation considering most of the band’s EPs are either hard to find or get pricey. You know what you are getting when you pick up a record by these guys, its going to be nothing but a headbanging fest with heavy guitars and a homage to the days of HELLHAMMER / CELTIC FROST. As I noted earlier this is a great piece of music to hold us over until the next full length. Get this album before it goes out of print (it comes in a cool 7″ – sized sleeve and includes an additional b/w booklet – Frank)! For more info: www.facebook.com/apokalypticraids, www.goat-vomits.com, www.facebook.com/hellmusiclabel