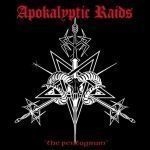 Oh, gods of the ancient cult, this is revived… formed back in 1988 this is APOKALYPTIC RAIDS’ latest full length album, and if you know any other albums of this Brazilian band, you know what to expect. Pure worship of HELLHAMMER and its sons like SODOM, BATHORY and VULCANO. The guitar tone is all from the legacy of Tom G. Warrior as is the vocal delivery. Naming the music style Black / Thrash is maybe not totally right, Caveman Metal suits more, and yet there is obviously some punked out influence and obscure Heavy Metal involved too. And the lyrical side is as diabolic as humorous as it should be as we all laugh while Satan eternally rots. The production values are perfect for this music and I must tell you that even if they captured a very primitive production essence, the production is really good. And to be honest, this fifth album of the band might be my fave so far, the guitar tone, although quite similar in previous releases, sounds vicious here. And even if they do accept their ways of conjuring the spirits of the old, they do have some really killer songs that are definitely their style, no matter how they sound to the ‘HAMMER or the FROST like the killer ‘Keep My Grave Open’ which is one of the best songs in here. Very “catchy” to name it in a way, and very old school, yet having that aura of nowadays pandemic era. Even the way they did the vocals like coming from a cave, it all sounds very good, and let’s face it, who does not love those damn pentagrams as we Metalheads do? Oh, and they close the album with another killer song, the anthem-like (for us cavemen obviously) ‘The Story Of Pope Joan’ (but you better not press the “stop” button of your player now, otherwise you will miss the excellent HELLHAMMER cover of ‘Massacra’ which was added as a secret bonus track to the album! – Frank). Burn the crucifix again! Yes, yes it is the same old cliches in here, yes we have heard many things similar many times, and still the good damn riffs will make your head bang. I need nothing more! www.facebook.com/apokalypticraids, www.facebook.com/hellmusiclabel