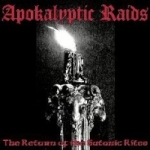 “The Return Of The Satanic Rites” is APOKALYPTIC RAIDS’ second full length album (the first with a “k” instead of a “c” in the band’s name though) and exactly continues on where its predecessor “Only Death Is Real” left off. Which means, fans of the classic “Satanic Rites” / “Apocalyptic Raids” HELLHAMMER era as well as worshippers of early CELTIC FROST (“Morbid Tales” / “Emperor’s Return”) will easily freak out on this. While I still complained about the fact that they “recycle” a lot of the old riffs in my previous reviews, I don’t mind that any longer as I noticed that this seems to be an important part of their musical concept. And you’ll get a lot of that again on this ten tracker. The album as a whole turned out rather speedy this time, yet always maintains the doomy and apocalyptic guitar sound that made HELLHAMMER so unique in their heydays. Vocals and drumming differ a lot from the Swiss masters though. While the vocals are always very aggressive and often even recall the classic Becerra style (fitting the band very well though!), the drumming is everything else but played in the simple HELLHAMMER / FROST manner. There’s quite a lot going on behind the kit, but never to the extend that they end up sounding technical (which APOKALYPTIC RAIDS is definitely not!). ‘The Impaler’ (with its rather ‘Circle Of The Tyrants’ like middle section) should already be familiar to followers of the band’s career, as it already appeared on their 1999 demo. ‘The Atheist’ also recalls ‘Circle Of The Tyrants’, but overall in a more HELLHAMMER-ish fashion, ‘The Way Of The Warrior’ kicks off with a typical ‘The Usurper’ riffing and the more midpaced / doomy ‘Emperor’s Return’ has a ‘Return To The Eve’ type middle section. As already mentioned, the rest of the songs is basically in a very uptempo vein, with the exception of the opening of ‘Skullcrusher’, which is a drum solo (!). As a kind of bonus you’re also getting a highly impressive cover of HELLHAMMER’s ‘The Third Of The Storms (Evoked Damnation)’ at the end of the disc (which is only mentioned in dark and very small letters on the sleeve). While Germany’s WARHAMMER (R.I.P.) were focusing on HELLHAMMER’s “Satanic Rites” / “Apocalyptic Raids” era exclusively, APOKALYPTIC RAIDS have a lot more releases to choose from and therefore offer a lot more variation in their writing. Album- and songtitles as well as the whole design / packaging is of course also connected to HELLHAMMER / FROST and done very tastefully, while the analog production stays very true to the original releases. You’re even getting classic record player / vinyl noises at the beginning of ‘The Impaler’ (which opens “Side Metal”) on a CD, which is a very cool idea indeed. So, all in all I really enjoyed this record and the band’s cool attitude a lot! For more info check out www.geocities.com/apokalyptic_raids or contact the band at apokalyptic_raids@yahoo.com