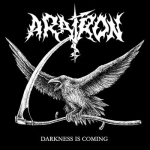 ARATRON is the spirit of Saturn, capable of turning everything into stone and basically manipulating a strong magic based on Alchemy. In the Metal realm, this is a band coming from The Netherlands, formed by ex – OBTRUNCATION members, a band I remember by their debut album “The Callous Concept” from 1997, a good album of American styled Death Metal. I was expecting a quite similar effort here, and part of it is right. They do have that sound similar to IMMOLATION, SUFFOCATION and to lesser extent CANNIBAL CORPSE. But also I can sense some touches of Black Metal here and there. It reminds me of what SOULBURN is doing nowadays, a strong Death Metal base with some Black Metal elements. I like the way the production turned out, it has a raw edge that fits the music, while also being clear enough. I can also think of ASPHYX in some of the more doomy parts specially the aura of this one recalls “The Rack” a lot. Some very good use of solos here and there add class to this self-financed CD release. The band really shines in heaviness in the more mid-tempo songs like the killer ‘Raise The Black’. The presentation is quite simple, yet fits them very well, and the cover art is also an indication of what you are about to experience. This is an album that grows on the listener. This is what the underground is all about, a band that is playing what they feel, and without the need of a label, decides to release this upon mankind. This is on my “to get” list without a doubt. And you should also make the same! www.facebook.com/pages/aratron/115099098521051, http://aratron1.bandcamp.com