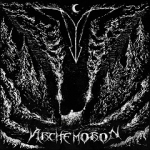 ARCHEMORON is a horde hailing from Athens in Greece. The band is active since 2008 and has just released their second output “Sulphur And Fire”. Before ARCHEMORON, the band was active under the moniker ANCESTOR and played a mixture of Heavy and Thrash Metal. 2008 they decided to change their name and their style and started playing melodic Black Metal influenced by the 90s releases of wellknown Swedish Black Metal or blackened Death Metal bands like MARDUK or even some DISSECTION here and there mixed with some sounds similar to newer BEHEMOTH. The main sound is blistering Black – Death Metal which gets completed with some of their Thrash Metal roots. The drumming is fast and precise with some really fine blast beats. The guitars provide brutal and blistering riffing but getting varied by their classic Heavy Metal roots by delivering some really fine solos and solid heavy riffing. The vocals are a mixture of evil caws and screams and some grunts here and there and this hellish mixture of the mentioned ingredients make their own diabolic sound. And this sound is a fine trip back into the 90s as their music really spreads out this old school feeling. The ten songs are dark and menacing and the songwriting is above average. Some decent keyboards here and there complete the cold atmosphere. The only point which could be discussed is the length of some of the tracks. The longer tracks sometimes could have been cutted short by two or three minutes in order to keep the flow of the song and make the fine ideas more compact. Some passages simply are too long and allow some ideas to get a bit boring in that moment. But this is the only small weak point of this album as the main ideas and the overall production are more than fine and this output can be recommended to all fans of melodic blackend Death / Black Metal. Check them out at the following locations: www.archemoron.com, www.facebook.com/archemoron