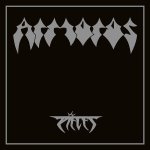 Within the last bunch of years High Roller Records displayed not only to focus on NWOBHM re-issues anymore but also to having their eyes on the 80s Thrash scene. After mainly going through the classics by EXODUS, POSSESSED, NUCLEAR ASSAULT or DARK ANGEL it’s now time for something I would call a C-League release, but mind you this is not because of the quality of the record rather than the low status of fame this band enjoys because it was only after seeing this album in the up-coming releases list that made me aware of its existence. Fortunately enough High Roller took care of re-issuing this piece of late 80s Thrash because it is one hell of a ride. Hailing from Canada, ARMOROS definitely as well possess this certain charm and aggression which also can be found on records by (my favorites) SACRIFICE or INFERNÄL MÄJESTY. The record starts off with ‘Forever Hold Your Pieces / CMDK’ which is a killer track loaded with deadly riffs and leads executed on high speed. That’s what I’m talking about! ‘Terminal Death’ brings in some slower moments only to reemerge into total thrashing madness Canada style. Fast riffs, faster vocals – kinda in the vein of “Torment In Fire” SACRIFICE era, brilliant! If this song can’t break your neck, you’re a god damn wimp who’s better off crawling back into the pathetic womb you came from. The ‘Apparition Of Force’ appears again with the third track, this time with a little less speed but still enough to crush and kill everything within its way. Killer leads and fierce vocals included of corpse! ‘Remember Michelle’ follows with a wicked bass intro somehow reminding a bit of the classic ‘Merciless Death’ only to lead into a pure chainsaw guitar assault that totally rips apparat your eardrums, what a beautiful feeling! As soon as the vocals kick in they turn the whole track even more into something reminding of DARK ANGEL. Definitely one of the highlights of the record! ‘The Dead’ is a pretty interesting tune with some weird guitar dis-harmonies and a more calm and playful middle part. ‘Euphoria’ is what follows adding some groove to the record. A good balance to the madness that happened beforehand, even though the chorus is like a jackhammer trying to crack open your skull. ‘Critical Mass’ continues with some more DARK ANGEL inspired material. ‘Dementia’ presents the band from a more “melodic” side with its almost catchy chorus. The speed within this song is again a bit reduced which ads some nice dynamics to the record as a whole. The last original track ‘Shadows’ has a lot going on throughout its 6:33min with weird bass licks and great timing changes here and there. “Pieces” then finishes off with a Thrash version of the funky ‘Earache My Eye’ by the godfathers of pot-smoking, CHEECH & CHONG. This track could have been left out to be honest but it seems that, when it comes to the pics on their Facebook page, this one underlines their passion for the green & sticky. Anyways big props to High Roller for re-issuing this killer undiscovered jewel. “Pieces” definitely offers everything a great Thrash record needs. Since I’m pretty sure you haven’t heard this record before go check it out via www.hrrecords.de or www.facebook.com/armoros-309357342568781