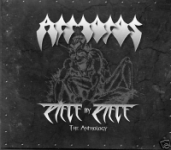 Every band, it seems, is experiencing a renaissance, regardless of whether or not they’re active. Since it’s generally agreed upon that the old guard still outstrips most of the young bucks kicking around, there shouldn’t be much of a problem with these 3-4 CD retrospective box sets. In the case of ARMOROS, it’s perfect. Canadian bands like RAZOR, OBLIVEON, and pretty much the entire kit and kaboodle weren’t given the promotion they needed to ascend beyond the cult following. In hindsight, the cult following is why sales are so high today. The ARMOROS box set contains everything they ever recorded, including demos from 1986 to 1993, live shows at Harpo’s, Club Soda, Victoria, an additional sticker of the album artwork as well as a fold-out lyricsheet and a booklet with lots of old pics, flyers, a band bio, liner notes and comments from the band on each track. The material is straight up Thrash. High velocity, and in your face Thrash Metal, clearly inspired by not any one or a few bands, but the entire scene. Pieces of all the big acts are present, but the most prominent of them is probably DARK ANGEL. At least, that’s the band ARMOROS has the most in common with. Boxed sets like this can be a bit pricey, but they’re sure worth it. www.marquee.com.br