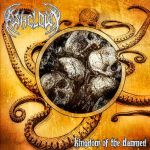 This release turned out to be a nice surprise. ASHCLOUD is a relative unknown band with a part British / part Swedish cast. The band is the continuation of SKINBAG (who existed from 2005 to 2006, as far as I know). The current members are Jonny Pettersson (vocals, bass, guitars) and Gareth Nash (lead guitars, vocals). You may know Jonny from WOMBBATH among others. With the first chords you’re pierced with a heavy sound that reminded of the early records from BLOODBATH, just to name an example. There are more parallels with this band, but ASHCLOUD knows how to convice in their attempt to distinguish themself. For instance, the many leads form an extra layer upon the heavy sound, making the melodies sound sharper. Also they have a sort of esoteric feel and making the whole remind of GOREMENT at times. The atmosphere is further heightened by dual vocals, samples and unexpected rhythms. In ‘The Serpent King’ this is succesfully executed, making this sound like a mix of VALLENFYRE and SEPTIC FLESH. More tracks have an idiosyncratic method, which combined with an immense heavy sound, creates a sundry and enjoyable record. In a stream of many similar soundling releases, this manages to stand out and is worth checking out. Do this and decide for yourself. Go to www.facebook.com/ashcloud666 or www.xtreemmusic.com for more info.