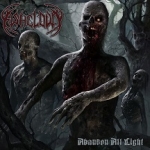 At first I was a bit in doubt due to the name of the band. Sounds more like a Pagan Metal band. Oh, well. Yet, the album title is in the domains I am used to. ASHCOULD is a band or maybe a project from a couple of guys from Sweden and England doing what they call Punk / Crust Death Metal the old way. Ok, I cannot but agree with them. Yes, they do have a big MASTER and DISCHARGE influence in their music, but also a very big ENTOMBED and DISMEMBER guitar sound. The final effect reminds of bands like BASTARD PRIEST or BOMBS OF HADES in their way of doing d-beat Death Metal, with some very heavy Punk music which is quite popular in Europe and not so much in America. But fear no more, the Punk / Crust sound is reduced to a minimal influence as it all comes out with a brutal and heavy Death Metal sound and also the lyrics are pretty much what real Death Metal is all about. For obvious reasons there is a strong MOTÖRHEAD vibe all over around, and that actually gives them that dirty Rock’n’Roll vibe, but again, they are not a Death’n’Roll band, just their influences shine in their Death Metal sound. Some might argue that there are way too many bands doing a similar thing, and probably that is true. It is just that ASHCLOUD does it in such a very good way and with such convition that it is hard not to notice. www.facebook.com/ashcloud666, www.xtreemmusic.com