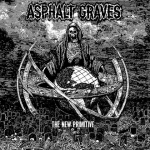 This is my first approach to Richmond based Death / Grindcore machine ASPHALT GRAVE, a new act on my radar that released their first and only record back in 2016 under Vitriol Records. The current year this stuff was re-released by Poland’s Selfmadegod Records. Reaching almost 25 minutes of music in 13 tracks, “The New Primitive” can be described as a piece of fast semi-modern extreme music. As usual regarding this kind of stuff, the lyrics concern to politics and social issues. The music is fast, really fast. In terms of sounding, this reminds me a bit of LOCK UP (well, maybe I’m not accurate since I haven’t listened to anything from them in many years). I really enjoyed tracks as ‘Megalomaniac’, ‘Who Do You Serve?’, ‘Scapegoat’, ‘Angst And Praise’, the thirty seconds ‘Let It Burn’ and the great DISRUPT cover ‘Mass Graves’ from their classic “Unrest” album. This record contains a NASUM cover as well. I miss more presence on bass. Well, I’m not deep into the current Grindcore scene nowadays (in fact, I’m more into old acts as early CARCASS, ASSÜCK, ATROCITY (US), GENERAL SURGERY, DEAD INFECTION, NAPALM DEATH, etc.) so I’m not impressed. Anyway, I can recommend you to give them a chance if you are interested in Grindcore and Death Metal that sounds a bit modern. One more thing, ASPHALT GRAVE feature members from acts as MISERY INDEX, GWAR, ex – DYING FETUS, ex – CANNABIS CORPSE, so if you are a fan of the aforementioned bands you must check this out. Follow ASPHALT GRAVES on Facebook at this location: www.facebook.com/asphaltgraves. Get a copy at www.selfmadegod.com