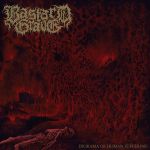 Sweden’s BASTARD GRAVE, on their second full-length entitled "Diorama Of Human Suffering", deliver an album of extremely solid material. With a sound very similar to ENTRAILS, whether influenced by them or not (hell, maybe it’s mainly the production), the five-piece Death Metal guys (and gal) throw a one-two punch into our eye sockets. Channeling an old school vibe, BASTARD GRAVE are exactly what we need, avoiding the sometimes annoying tech Death so abundant these days with an ugly, grimy array of carrion-drenched guitars and bubbling, wound-ripping vocals. The first track ‘Drowning In An Ocean Of Bile’ is just that… a gurgling, putrid, mucus-filled mixture of Death Metal that sticks to the lungs and pounds against your spine. The title track comes next, billowing in a swaggering song of simple, yet powerful riffs that remind us why we listen to this genre in the first place. ‘Transubstantiation Into Feces’… goddamn, what a title! If anything, the band knows how to name their tracks. And a ricochet of throbbing guitars and drums don’t hurt either. ‘Inner Carnivore’ is another straitforward song while ‘Life In The Sewers’ trudges along as if drenched in filth. The sixth track ‘Translucent Visions’ is a charging-stopping-charging again monstrosity ready to tear your flesh from your scalp. ‘Madness Of Creation’ and ‘Non-Functioning Pile Of Rot" (is there actually a functioning pile of rot anywhere?) continue the onslaught as the final track ‘Stench Of Infection’ ends the album with a very satisfying roar of victory. "Diorama Of Human Suffering’ isn’t trying to push any boundaries. But fuck if I don’t feel like I need to shower after hearing this kick-ass album. For more information, check out www.facebook.com/bastardgrave, www.pulverised.net

BASTARD GRAVE - What Lies Beyond - by Carsten Lomme