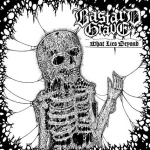 In the past Pulverised Records has already been the shelter for Swedish acts like AMON AMARTH, ETERNAL OATH, FLESH / THE PETE FLESH DEATHTRIP, UNMOORED and DESULTORY, just to name a few. And up to the present day they carry on with this tradition. Besides the terrific UNDER THE CHURCH, this small Singaporean label signed these four guys and one girl from Helsingborg. BASTARD GRAVE recently hit the murky Swedish underground back in 2012, but it lasted two more years, since they came up with their demo "Unmarked Grave". Now it’s 2015 and their debut "What Lies Beyond" will be unleashed upon mankind. The whole carnage starts with some sort of DESULTORY memorial feedback that shows the line of approach for the next 40 minutes. BASTARD GRAVE offer straight forward Death Metal in the classical Swedish tradition. A Sunlight like production with all the beloved elements like buzzsaw guitars, blast beats accompanied by that crusty / punkish drive and slight melodical hints here and there enriched with some AUTOPSY sounding parts like in ‘River Of Death’ just made my day. Only their vocalist Sonny needed some time to convince me, due to his not that much varied way of shouting, but after some more spins, I really liked his harsh voice. He even reminds me to some extent on a less desperate sounding Klas Morberg of mighty DESULTORY. A fine detailed album cover drawn by artist Ragnar Persson rounds out an old school sounding, yet refreshing and more than solid release that should appeal to each headbanger into bands like EVOCATION, later DISMEMBER and DESULTORY. Even though "What Lies Beyond" might not have the ability to become a classic like many releases of the aforementioned grandpas of Swe-Death, it for sure gonna find its way into the stereo and hearts of many Death Metal lunatics that appreciate well hand crafted, brutal musical art. For further information hit the following links: www.facebook.com/bastardgrave, www.facebook.com/pulverisedrecords