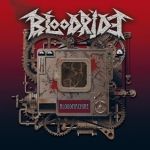 The beer-smelling ol’, sexy and fat fucks of Finnish Thrashers BLOODRIDE are back with their 2nd album; a 10-track affair this time titled "Bloodmachine". BLOODRIDE’s debut record, "Crowned In Hell", that was released in 2011, screamed for all things old school Thrash Metal – and the apple has not been dropped too far from the same tree on "Bloodmachine" either as far as some of the band’s latest album’s old school values are concerned. Basically "Bloodmachine" is a clear continuum to "Crowned In Hell": not much has changed after all when it comes down strictly to BLOODRIDE’s musical approach. The band counts on their old and safe weapons that they already had in use on the very much testosterone-oozing and all fists raising debut of theirs. Straightforwardness, simplicity, heaviness and old school are the main themes that are carried through the whole record – and at that, the BLOODRIDE chaps have really accomplished the needed and all the necessary, just to offer another dose of in yer face old school Thrash. Jykä’s masculine and gruff sounding vocals, accompanied with some gang shouts of the rest of the BLOODRIDERs, also seem to work surprisingly well throughout the entire album, truly following some old traditions of how the Bay Area Thrash was done back in the day. The last song ‘Fight The Fear’ has also Sluti666 from the one and only IMPALED NAZARENE performing the guest vocals for this track, in which Sluti666 takes the command vocally with his whole viciously attacking vocal arsenal. All in all, a very solid follow-up album from the BLOODRIDE camp, which should please a bunch of Thrash fans out there. Get this, raise your fist and start banging your head ’til your neck snaps! \m/ More about BLOODRIDE can be found at: www.bloodride.com, label: www.violentjourneyrecords.com