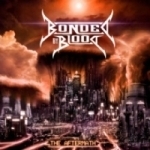 I refused listening to this band due to their name. Yes, it sounded to me like an easy rip off, reminding people they were a Thrash Metal band by taking the album title of one of those albums that marked my life. I considered it an insult. Do not ask me why, but that was it. Yeah, same thing I felt with MERCILESS DEATH. And yes, I knew they were considered between the new wave of Thrash Metal revival that has spawned countless of really mediocre bands. So, here I am presented with the third album of this young American band (which is, if I am not wrong, formed by Latinos) and I had to eat my words. Not only they are not in the same league of many mediocre Thrash bands… they are far superior. And even if their name recalls mighty EXODUS in fact they are the closest thing to FORBIDDEN from their “Twisted Into Form” album and also a lot of TESTAMENT (not to forget the vocal delivery of their new singer, Mauro Gonzales, which recalls DESTRUCTION’s Schmier pretty often – Frank). And the guitar tone they deliver here is so damn crunchy and head-thrasher that it burns. There is a great and powerful use of the bass; something that many Thrash Metal bands has just forgotten to do. And even if it is melodic at times, it does sound heavy and quite dark. This album makes me check out their previous material (you will be positively surprised even more, I suppose, since I personally still consider their debut as the strongest effort of those guys! – Frank), and there is no doubt this last album is a more serious Thrash Metal affair. The only negative point is the really worthless RAGE AGAINST THE MACHINE cover. www.facebook.com/officialbondedbyblood, www.earache.com