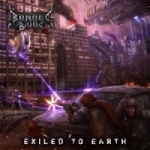 With a countless number of “Retro-Trash” clone bands trying to copy the classic bands of the late 80s / early 90s, BONDED BY BLOOD (California, USA) stand out as a honest outfit that have built their own style, although drawing the logical influences of the sub genre. The album’s concept is set in the future. Earth’s underground warriors must defeat and overthrow the Crong, an alien race who has dominated the earth for 600 years. A limited comic strip of the story is included in the first copies of the album. How cool is that? I was looking forward to check if these guys would keep up to their fantastic debut album “Feed The Beast”, also on Earache. “Exiled To Earth”, their second album, delivers the goods with a great production, excellent mixing and mastering, leaving space to song dynamics and instrumental nuances. I can’t praise enough new vocalist’s Jose “Aladdin” Barrales performance; a gruff high pitched, frantic style that sits right between Sean Killian (VIO-LENCE) and Steve Reynolds (DEMOLITION HAMMER). And this wouldn’t be a Thrash Metal album without the chain gang choruses, right? Bassist Jerry Garcia and drummer Carlos Regalado provide a perfect and solid rhythm section for Alex Lee’s and Juan Juarez’ brilliant guitar work and soaring flashing leads. This is it: a relentless attack of Thrash Metal madness, heavily influenced by the Bay Area style. To sum it up, I think the 246 riff DARK ANGEL classic “Time Does Not Heal” has found a worthy opponent in “Exiled To Earth”. I still need to find the patience to count them all. Thrash or Die! For more info go here: www.myspace.com/bondedbyblood, www.earache.com