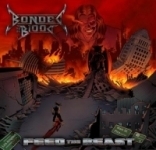 Currently there’s quite a lot of talk going on about a big Thrash revival, but as so often the quality of most of the bands that had already jumped on the bandwaggon is not really worth a mention. From all the so-called "new hopefuls" that I have checked out lately (no need to mention any names here), none would certainly ever be able to continue on what acts like FORBIDDEN, EXODUS, DEATH ANGEL, TESTAMENT, VIO-LENCE and the likes had so successfully started back in the 80s. They all just sounded totally boring, uninspired and often even ridiculous to me… But luckily there also seems to be some light at the end of the tunnel, cause a very young bunch (18 years old in average!) from Pomona / Los Angeles, California has delivered their highly impressive debut full length via Earache Records most recently. Adopting BONDED BY BLOOD as the band’s moniker was of course very couragous as it is linked with one of the best Thrash Metal albums of all time, but these guys surprisingly did live up to those high expections as "Feed The Beast" turns out to be a very strong musical statement from start to finish! All elements that originally made Thrash Metal so successful and enjoyable can be found in their songwriting: lots of speed, razorsharp riffing, great soloing, an extremely tight rhythm section, a cool vocal delivery (that is way beyond the totally overused KREATOR type screaming and more in the classic Baloff meets Schmier type direction) and an overall very high level of intensity. The album by no means sounds like an effort from a band that had just formed in the summer of 2005, but almost more like an undiscovered gem from the glorious days of the Bay Area. There’s so many ingredients to discover that recall the best moments of "The Ultra-Violence", "Forbidden Evil", "Bonded By Blood" / "Fabulous Disaster" and "Eternal Nightmare" that it’s a real pleasure to listen to the album over and over again (which is pretty easy as it’s just about 40 minutes long). No surprise that the band already won a "Battle Of The Bands" contest (which included over 250 bands) very early in their career. Ever since they had played out live countless times and already shared the stage with heavy weights such as TESTAMENT, FLOTSAM AND JETSAM, SADUS and EXODUS (to name but a few). Before they finally got signed by Earache Records they had already recorded a demo in 2006 ("Four Pints Of Blood") and a self-financed EP in late 2007 ("Extinguish The Weak") which I would really like to check out as well now… Anyway – if you’re looking for a band that plays the good old-fashioned Bay Area Thrash with the same amount of enthusiasm and aggression as the forerunners of the genre, you gotta check out BONDED BY BLOOD! By the way – the first edition of "Feed The Beast" also includes a very cool looking bonus CD with two additional tracks (‘Severe Violation’ and ‘Unusual Punishment’), so make sure to get that one quick! www.myspace.com/bondedbyblood, www.earache.com