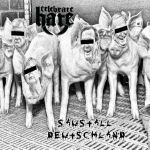 CELEBRATE HATE are maybe not what one might call a releasing machine. Ever since they first appeared on the scene in 2009, the duo from Northern Hesse in Germany has unleashed two demos and an album upon mankind. Their second album output “Saustall Deutschland” (“Absolute Mess Germany” in English) was already available digitally nearly two years ago. Due to some very huge delays at the pressing plant, the vinyl version didn’t see the light of day until summer 2022. But now it is here, on brown-marbled vinyl directly from the band. What can we expect from the follow-up to “High Gain, Low Budget”? Of course we have some fine Grindcore, North-Hessian style. But that’s not all, as the band has its roots in Death and Thrash Metal. It’s especially the Thrash Metal influence that’s more noticeable in the new songs from CELEBRATE HATE, giving the album a more aggressive and pissed off sound over all. And aggression is the key to “Saustall Deutschland”, fitting the situation and sentiment in my home country. Meanwhile completely in German, the lyrics aim at the greed of the rich and their ruthlessness in particular, as well as other tendencies in the society that go wrong. Thus lyrics and music work hand in hand. And asides from the quite short running time, the 13 songs are a real joy and a good way to get rid of aggressive feelings for a while. Those of you into extreme music with class should go and check out “Saustall Deutschland”, as CELEBRATE HATE really take their moniker more and more serious. Check them out at: celebratehate.bandcamp.com. And for more information and contact, go to www.facebook.com/pages/celebrate-hate/216742128361426.