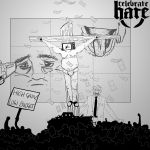 The North Hessian Grind terrorists CELEBRATE HATE are back. Four years after their second demo “Nordhessisch Noise Terror”, the duo now finally comes along with a full length album. “High Gain, Low Budget” is a vinyl only release with 17 brand new songs. And these songs are damn fine stuff for those of you who dig Grinding Death with feeling and a message. Compared to the demo recordings, CELEBRATE HATE have injected a higher dose of Grindcore to their sound without denying the Death and decent Thrash roots. Thus I sometimes feel remembered of the early days of Grindcore, when bands like PUNGENT STENCH or BLOOD were closing the gap between the genres. Yet CELEBRATE HATE are still far from being a primitive blastbeat machine, since their songs are even more diversified than the demo tracks. From longer tunes like the opener ‘Democide’ or ‘Live And Learn Nothing’ to traditional short songs like ‘Hohnsteuerkarte’ or ‘Wahlkrampf’ we find the whole range of stuff. But it’s rather obvious that CELEBRATE HATE put more stress on writing longer tunes with a structure and a certain pattern than before. Sometimes there are even some influences from modern Grind bands like YACØPSÆ, infiltrating the songs with slowly grinding parts as well. As far as the lyrics are concerned, they still are both in German and English, and seem to be more ambitious. They’re broadly aiming on criticizing certain tendencies of modern life, like rubbish on TV (‘Demütigungszeremonie’), social networking (‘Sozialer Net-Zwerg’) or some errors in the educational system (‘Sport Und Kunst Auf Lehramt’). Of course the German lyrics are much more enjoyable for a native speaker, especially the puns, but not speaking German isn’t an obstacle to have a lot of fun with “High Gain, Low Budget”. This album should satisfy the needs of all those Grindcore lovers out there as well as those of you who are digging extreme music with style. To get this fine vinyl album and help Chris gaining some space at home, contact: celebratehate@web.de. The digital version of “High Gain, Low Budget” is already online for quite a while now and can be found here. For more information and a "Like", visit the band at: www.facebook.com/pages/celebrate-hate/216742128361426.