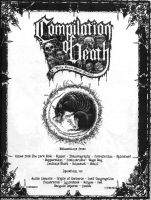 Decorated with one of the greatest logos the Chilean fanzine COMPILATION OF DEATH can convince starting at page 1. Self Desecrator is the man responsible for the logo and the rat on the cover, but responsible for this great fanzine in the tradition of the Italian THANATOGRAPHY fanzine (for those who remember…) are Gabriel Gatica and Joseph Curwen (later one handling the vocals and the guitars in UNAUSSPRECHLICHEN KULTEN) and, damn, they did a great job. The layout itself looks simply great, professional yet old school enough. Talking about the contents you can argue, as approx. half of the interviews are old ones released before in publications as VOICES FROM THE DARKSIDE (ABHORRENCE, Mike Browning, NECROVORE, ORDER FROM CHAOS and RESURRECTION), SLAYER MAG, PUTREFACTION, THANATOGRAPHY, SUPPURATION, SPIKEHEAD, DISINCARNATE, MEGA MAG, DECIBELS STORM, MOULD OR METALLIC BUTCHER. Nevertheless I think this kind of fanzine-recycling is a pretty good idea as many of those interviews are not available for those who missed these fanzines (well, despite those VFTDS ones as you can find them online here). I like the idea and this DARKTHRONE interview is fantastic – I knew it before and now with a distance of ~18 years Dag’s words are really interesting (example: "What about the future, any plans??? – Make some new songs, and tour as much as we can". That’s precisely what they did, haha). Own, pretty interesting and mostly damn long interviews were done with likes of Frank Stöver (guess you know him), Nicola Constantini and his ENCYCLOPEDIA OF SVENSK DÖDS METAL, FUNEBRARUM, ANIMA DAMNATA, DEAD CONGREGATION, SANGUIS IMPEREM, IGNIVOMOUS, CRYPT OF KERBEROS and many many more. In this first issue you need to forget about reviews as there are simply no reviews featured, but this should change on issue 2 according to the editors. Anyhow, there’s so much to read in this fanzine that I would say that this COMPILATION OF DEATH is now along with MYSTICAL MUSIC one of the top addresses when talking about old school Death Metal journalism in printed form. Get in touch with the editors immediately as I can believe that this issue will be sold out soon. Ask for the price or better ask them for mailorders who sell this fanzine as I can believe that the postage would destroy the price once again. Contact Gabriel at compilationofdeath@hotmail.com or Joseph at joseph_curwen@hotmail.com