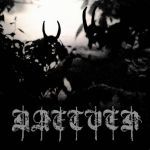 Mystery… darkness… DAETVEN… this one man band, enshrouded in gloom, releases their first album with 8 songs of eerie Black Metal. The first notes might be deceiving as they sound like every day lo-if Black Metal. But the horrible truth is revealed. The core of the band is minimalistic Black Metal, quite similar to early BATHORY, but then again they add subtle pieces to their composition, making them more similar to early DARK FUNERAL. The most noticeable thing is that the guitar player, although keeping it simple and direct most of the time, has a vast array of weaponry in his bag. Some solos and harmonies here and there tell me of a very capable guitar player that decided to create music in many levels lower to what he can actually do, and believe me, it works in here. Yes, some songs are quite similar in vibe, yes the vocals, which are more in the whispering style than anything else could probably use more variety, but then again it all sounds in place, and fans of the style will definitely like this. And also the production values are not like recorded in a dungeon, as averything sounds good, yet maintaining that primitive touch needed for this music style. All songs are named in numbers after the band name, and I suppose they are done in their native Polish language, so more mystery for the band. Although I can say I have heard many similar things before, and there is nothing really original here, it is so well done, and has so many good riffs, that at the end only darkness shall remain. Victory in dark flames! www.facebook.com/utsogp, https://daetven.bandcamp.com