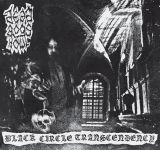 Since I liked the “Mausoleum Of Confessed Thoughts” demo from last year I was quite curious, but I did not except a result like this. “Black Circle Transcendency” has nothing more to do with the underground lo-fi Black Metal DEAD DOG’S HOWL presented on their first release. Instead the band obviously quit playing music at all. Rather this album is more an accumulation of sounds. Sad, but true. Besides the generic intro and outro there is almost nothing worth listening. At its best moments the music could serve as some kind of soundtrack for a B horror movie. But at its worst moments there is just one riff appearing, then silence followed by a drum beat, thereafter silence again and then some keyboard sounds appear and so on. Vocals, besides spoken words, are almost completely missing. The top of impertinence against the listener are the tracks ‘Towards The Immutable Quest’, a prototypical interlude which is followed by ‘We Descend With Pride’ – another typical intermezzo! In fact the Black Metal elements are only present in homeopathic doses. One needs nerves of steel for listening to this album. So, if you are brave enough or search for a challenge visit https://deaddogshowl.bandcamp.com or the label www.facebook.com/fallentemple666