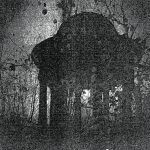 Quite frankly, I was a little bit shocked by this three track demo by DEAD DOG’S HOWL. Because the sound quality takes you back about thirty years in time. A clear and forceful sound, even for self-financed outputs, has become standard during the last ten years. But the duo from Poland consequently follows their own vision of creating music that is inspired by late eighties / early nineties Black Metal. A time were some bands tried to create something aside from the endemic reign of Death Metal. Recorded with the help of a four-track recorder the first impression of the sound is shitty and lousy, it took me three or four runs and very turned up speakers with the aim getting used to the sound. Which surprised me, since I am not a sound fetishist. Instead I like raw, lo-fi sound if it fits. But I have not heard such sound for many years. So please do me a favor and do not be fooled, the music itself is a treasure trove for all fans of VON, MYSTIFIER, early works of SAMAEL or very early works of TIAMAT. At some moments wild an impetuous, the next moment mystical and occult. Fast parts and aggressive vocals alternate with keyboard and spooky spoken words. The band itself declares Greek pioneers NECROMANTIA (founded 1989 by Magus Wampyr Daoloth) as main influence, although DEAD DOG’S HOWL are not using two bass guitars and abstain from using a saxophone. As it should be, the demo is released on cassette (limited to 200 copies), CD and in digital format. Anyone interested in the mentioned bands or generally interested in taking a time warp 30 years back should not miss “ Mausoleum Of Confessed Thoughts”. www.fallentemple.pl