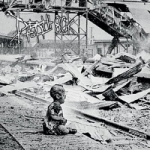 My initial reaction after the first spin was "Holy motherfuckin’ shit!!" Literally, I felt like being overrun by a 1000 ton tank on steroids trying to find my flattened skull and splattered guts!! No shit, DEATH TOLL 80K perfectly lives up to their name and deliver no-frills, straight up mix of fiery Grindcore / Crust with the SLAYER-like riffs thrown in here and there, with some added BOLT THROWER, TERRORIZER, INSECT WARFARE and ROT (Brazil) insanity, but the best part for me is that it has been boiled and presented with fat, heavy, thick Swedish Death Metal sound. So you get 23 tracks in 25 minutes of ferocious raw Grind / Crust vibe with usual bleak and dreary subject themes about suffering, injustice, death, murder, war and so on, but what sets DEATH TOLL 80K appart is their ability to deliver a killer riff after killer riff after killer riff and so on and so forth, so after this blitzkrieg is over, I am left searching for my ears and realizing that there wasn’t any boring filler at all, just pure adrenaline spiced up with enough catchiness and variation to make this album the best Grindcore release of the year… at least so far! See, with most new Grindcore albums I tend to get lost in the vortex of (usually) trebly guitar noise, screaming vocals and fast, but simple and unimaginative drumming, whereas DEATH TOLL 80K manages to keep it heavy, quite varied (two vocal styles fit great), going from superfast to middle-paced rhythms in a space of one track and getting to the fucking point every time, and the point, folks, is to flatten you into the ground! Stand out tracks like ‘No Escape’, ‘Cycle Of Mystery’, ‘Empty Pose’, ‘Commodities’ and ‘Sickened’ show their songwriting capabilities pretty damn well and this is a rare feat nowadays too. This should appeal to Thrash, Crust, Grindcore and Death Metal maniacs alike! Buy or die! www.myspace.com/deathtoll80k, www.fda-records.com