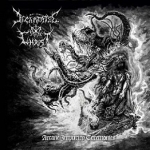 Set for release in April, Germany’s F.D.A. Records have picked another potent merchant of pure, uncompromising Death Metal with Spanish act DECAPITATED CHRIST who instantly blew away my somewhat disappointed reactions on the albums by MORFIN and DEROGATORY. While unleashing nothing revolutionary upon mankind, this vigorous and vicious blend of compact, straight-forward Death Metal musically inspired by the likes of BOLT THROWER, BENEDICTION or the more simple side of Florida Death like OBITUARY, blasphemous lyrics and strong growls reminiscent of HEADHUNTER D.C.’s Sergio “Baloff” Borges thunders absolutely pleasant from my speakers. Special thumbs up for the meaty production that proves to be an immediate winner in the drum department – nothing sounding tinny or too thin here – avoids any trace of being polished and finds an ideal balance between today’s standards and a timeless authenticity. The songs on “Arcane Impurity Ceremonies” usually employ just a handful of effective riffs, massive grooves and occasional up-tempo sections plus some catchy melodic refinements turning tracks like ‘Sabbath Of The Blind Dead’, ‘Human-Eating Herd Of The Damned’ or the sympathetic BOLT THROWER homage ‘When War Brings Glory (Cenotaph 666)’ into flawless, uncomplicated yet far from dull Death Metal numbers that should work fantastic in a live situation. Being already the fourth “crusade” of the band, “Arcane Impurity Ceremonies” proves these lads know how to write proper songs and have found a musical formula allowing you to immediately connect with their sound while not being remembered of one of the over-copied classic bands in the genre. If neither the ultra-occult-bizarre sort of Death Metal (think PORTAL, ANTEDILUVIAN) nor all-too technical stuff (e.g. later DECREPIT BIRTH, BENEATH THE MASSACRE, CRYPTOPSY) is your thing and you are dreaming in red of Death Metal that is just exactly that for its own sake, then the unsophisticated yet totally entertaining “Arcane Impurity Ceremonies” is a ritual you should not miss! Listen to a track here. All further info at www.facebook.com/decapitatedchrist, www.fda-records.com