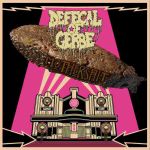 DEFECAL OF GERBE is a Grindcore / brutal Death band from France and this is quite a lot of music here for your listening pleasure. Beginning with a parody in French of one of the most famous lines in the ‘Exorcist’ movie, the album quickly explodes in a very brutal and humorous kind of Grind, with many puns, often recurring to their native French (such as in the opening ‘Sympathy For The Débile’) or in English (‘Abbath Loves Friskies’). Still, I am judging this mainly from the titles, as for the most part lyrics are unintelligible and the vocals are extreme. In fact there are different kinds of vocalizations because all three members of the band contribute their own parts. There is a screamed punkish voice, pig squeals from the slaughterhouse and mega distorted low pitch growls. All together with very well played and well produced music with paces varying between fast and super-fast. There are good riffs and all that, but it seems evident that the tone is in humour and silliness, and it shows in the very songwriting. Jokes are ever present, such as in ‘Adolph Lundgren’, that even has its own video that you can check out online. Also the cover artwork (and title) is a spoof of LED ZEPPELIN’s "Mothership" compilation album, except here the zeppelin is a huge turd. The songs are numerous, since they tend to be rather short, for the most part between one and three minutes in length. The second CD collects a number of recordings and re-recordings from splits, EPs and other stuff. There is even a bit of the opening of a French cartoon animation that was on TV when I was a kid, ‘Ulysse 31’… I even had the 7" back then, ahah! So, if this is your kind of stuff, give these Grinders a listen at www.facebook.com/defecalofgerbegoregrind, label contact: www.xenokorp.com