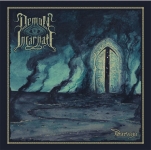 The German band that got us all confused with their name (no, they do not play old school Death Metal), back when they released their debut album (“Demon Incarnate” also on F.D.A. Records, back in October of 2015) is back with a new EP, to be released in August 2016. In order to try to confuse us even more, the EP title is about the Darvaza Crater, a natural gas crater in Derweze, Turkmenistan (also known as the “Gate to Hell”, “Door to Hell” or the “Crater of Fire”). Despite this fact, we are not in the presence of any blasphemous Black Metal band! DEMON INCARNATE, instead, play a high quality dark and atmospheric Hard Rock with the right dose of Heavy and Doom Metal, something that can be confirmed on the very first riff of the opening track (the video for the EP’s title track has been released in late June 2016 and can be viewed here). Lisa Healey’s voice fits perfectly with the band’s instrumentals throughout the nearly 26 minute EP, spread over six catchy tracks that will not disappoint any BLACK SABBATH, LUCIFER or DOWN fan. More info at: www.facebook.com/demonincarnatemusic, www.fda-records.com