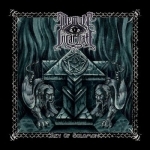 I was lucky enough to review DEMON INCARNATE’s debut album for Voices From The Darkside some years ago. It was an awesome album and I thought the German outfit could only get better. Well, three years have passed since that album and the band has just released their sophomore album, "Key Of Solomon" on the also German label F.D.A. Records. And I am really glad to announce that the band got better. Much better, in my humble opinion. Mainly, their music mixes equal parts of Doom Metal and Stoner Rock. But they have crafted a really singular style where you can hear influences from CANDLEMASS, CATHEDRAL and BLACK SABBATH. This time around I also noted some TYPE O NEGATIVE hints here and there. The best of it all is that now nothing can take away from the identity they have created as a band. They have built and developed a monster! Tobias Schmidt’s drumming is heavy as most of the songs demand, but his groove is undeniable, even on the slowest and most mournful parts. Phil Gandner’s bass lines are solid and add variation, since they don’t just follow the guitar. Which takes me to Devil Jay. His guitar riffs are catchy and powerful and on this album, there is a lot more of that awesome Iommi influence, specially in the well placed leads. To round it up, the beautiful, haunting yet powerful vocals of Lisa Healy. Her melodic work in this album is a huge step forward from their debut album. Tracks like ‘Into The Never’ and the title track ‘Key Of Solomon’ are prime examples of what these guys and gal can do. The production fits perfectly the style of DEMON INCARNATE. It has that 70s vibe without sounding muddy or outdated. I really liked the clear yet solid mix. The drums sit really nice in there, blending with the other instruments. Maybe the bass guitar is pushed back a little, although it can be heard when it has to be heard. And the guitar tone is gritty and menacing. I also dig how the vocals open up the otherwise dense atmosphere of the album. I really don’t know what else to say. "Key Of Solomon" is that good! If you like any of the bands and / or styles I mentioned before, you definitely need to check DEMON INCARNATE out; one of the best bands I have heard recently and I sincerely hope they will continue releasing new material. Show them some well deserved support here: www.facebook.com/demonincarnatemusic. And get their releases from their label here: www.fda-records.com