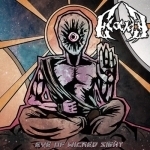 Among all the countless young and new old school Death Metal bands are fortunately many really promising ones. This fact is really astonishing cause usually when a genre becomes more and more popular most newcomers are just poor sounding copycats. But, in my humble opinion, in the “new” old school Death Metal scene there are more good than crappy bands. And amongst those countless promising new bands are a few which are absolutely killer… One of those bands is ECOCIDE from the Netherlands. I’m really surprised how grown and mature those young Dutchmen already sound. “Eye Of A Wicked Sight” contains seven (plus intro) well arranged and composed songs which are absolutely awesome. Also vocals, production and the obscure cover artwork are remarkable, so the whole package just kicks major ass!!! This is pure Death Metal the way it was meant to be and how it was played in the early 90s. Sure, they won’t win the world championship of originality but that is not important as long as the music is as brilliant as it is on “Eye Of A Wicked Sight” and performed with such an enthusiasm. I’m sure the majority of our readers are into the classics “From Beyond” by MASSACRE and “Leprosy” by DEATH and so I advise all of them to check out “Eye Of A Wicked Sight” because it is obvious that especially “From Beyond” is an important source of inspiration for ECOCIDE. That surely doesn’t mean that I would call them copycats, but they exactly play the same style. Those young ghouls are worshipping the old spirit with every single note they have composed for this brilliant debut full-length. To sum it up: this is one of the strongest pure Death Metal albums in 2013 and therefore a must have for every lover of early 90s Death Metal. You can order the self-financed debut full-length CD via their Bandcamp site (including an immediate digital download) for a very fair price. So, do yourself a favor and buy this great piece of old fashioned Death Metal as soon as possible. www.facebook.com/ecocidemetal, http://ecocide-osdm.bandcamp.com