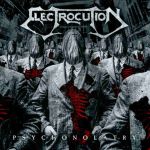 ELECTROCUTION ia an old Italian band formed in 1990, and that I know since their demo days as I was in contact with them and got their "Remains" demo. Back then they were a very good SEPULTURA inspired Death / Thrash band with touches of SODOM and MALEVOLENT CREATION. They released their debut album "Inside The Unreal" some time later with a similar style, yet with a bit more brutal direction, less thrashier more Death. And then after some more recordings, they dissapeared in 1997. Obtaining that album for a decent price was out of question a few years ago, so there was interest in the band again, and it was re-edited to please those looking for a decent price edition. The only original founding member, guitar player and vocalist Mick decided to gather new musicians and continue with what started many years ago. In 2014 a second album was released, in a style similar to what they did on their debut, yet more brutal and with some technical touches, getting the band more towards a MORBID ANGEL style with IMMOLATION touches. And to my ears that is something more than welcome. So after having again a new line-up, they deliver their third album that follows the same formula. If it already kills, leave it like that. Yes, very brutal Death Metal with some tehcnical touches, a massive production, venomous riffs and that sense of impending doom that few bands are able to deliver with such conviction. Songs like ‘Maluma Intra Nos Est (Seneca I Century AD)’ sends shivers down the spines of the unsuspecting mortals, with great main riffs, killer solos, and cavernous vocals. Sometimes the intensity of the music is on the same level of Brasilian bands like KRISIUN or RAEBELLIUN but I even find these Italian masters to be more interesting in some aspects, like when they use some DEATH influenced riffs (from the last albums that Chuck did) like in ‘Divine Retribution’. Every time I listen to this album, I find more and more great things, creative ideas and masterful execution. Yes, for real, they have come to fulminate all with mighty ELECTROCUTION. Also a killer new recording of their demo song ‘Premature Burial’ is included. For sure one of the best albums of this year no matter what. www.facebook.com/electrocution.band, www.auralmusic.com