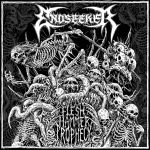 Hamburg, Germany’s ENDSEEKER, after an EP and a split, have released their debut album "Flesh Hammer Prophecy". And it’s a monster of an album. Playing Death Metal in the same vein as ENTRAILS, Lenny (vocals), Ben and Jury (guitars), Torsten (bass) and Andre (drums) provide a filthy, rotten display of tracks sure to please any listener. From the noisy first few seconds of the opener ‘Into The Fire’, melding into a brief doomy pause, the track lumbers forward into ‘Flesh Hammer Prophecy’, smashing face-first into a churning plethora of high-energy wrath-like devastation. Within the first two minutes of this album, there’s no doubt in my mind the band will deliver throughout. And damned if they don’t disappoint. ‘Demon Spawn’ rams like a juggernaut down our throats with good old fashioned blistering guitars, esophagus-ripping vocals and bludgeoning drums. The fourth track ‘Malicious Instinct’ continues to crush us in its vice-like grip without letting go. ‘Worshipping The Bloodthirsty’ is the song you punch your friend in the face to. The rapid kick-ass destroyer of life marches onward with ‘Feasting On The Decomposed’. ‘Shredding Your Graven Image’ is exactly the sort of Death Metal we ask for. ‘Black Star Rising’ changes it up slightly with a mid-tempo swagger before morphing into a steady rhythm of decayed brutality, which then plummets at velocity speeds into a miasma of bloodthirsty rage. ‘Powder Burns’ and ‘Possessed By The Flame’ end the album, encompassing an unholy taste of a hopefully long future for ENDSEEKER. Some bands simply get it. Others wade through waters too high for them to catch a breath. ENDSEEKER is in the former group. Delivering an album this consistent and energetic is a rare feat these days, and "Flesh Hammer Prophecy" will keep your head banging for 42 minutes straight. For more info, check out www.facebook.com/endseekermusic, www.fda-records.com