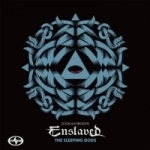 I might not be the biggest ENSLAVED fan around, though I’ve adored and followed the band since "Frost" and have been, more or less, as astonished each time the Norwegians have released new music as a fan of their progression and evolution, so this new little teaser of an EP did soon catch my interest. This little treat is released by Scion A/V which was an unknown size for me, until the release of IMMOLATION’s brutal offering "Providence" and now this EP with ENSLAVED. A walk through the band’s musical development. Fierce and aggressive, folky atmospheres, brutality and progression, all boiled into 5 tracks spanning over 28 minutes. After the exploration of how far ENSLAVED could take their music off their original musical path, the few couple of albums have shown a return to the roots, without loosing the extreme progressive element, the band has incorporated into their sound, and more or less has made their new trademark, together with the Viking influenced Black Metal extremities. This nice little EP could have been the binder between "Monumension" and "Below The Lights". The first track on this release ‘Heimvegen’ is a beautiful mix of the grim and harsh side of ENSLAVED and their flair for folky, very atmospheric and epic Metal, a track that draws the listener into the universe of the song and lets one participate in the journey. A superb showcase of the band’s ability to write grim and harsh music with a very catchy and melodic side to it. And the vocals, wauv! After ‘Heimvegen’ we get ‘Alu Misyrki’, a monster of a track with fretless bass én masse, hell yeah! And yet again grimness blended into beauty, a grim and harsh vocal, aggressive drumming, a bit more laid back riffing, and the monster bass together with the melodic and beautiful vocal that we have grown to love. Classic progressive ENSLAVED! Now we get 2 instrumental tracks: ‘Synthesis’ and ‘Nordlys’. The first mentioned isn’t up my alley, as the title might suggest, it is created by keys all the way through, not bad, though not a stand out track as well. An intermezzo that has to be done, before we float into ‘Nordlys’ a nice quiet yet gripping and very atmospheric track, that is driven by simple guitars, some synth and controlled drumming, and again some nice fretless bass play. The last track ‘The Sleeping Gods’ is a dark and quite doom-laden yet mellow track, a trembling atmosphere that rolls over the listener and draws dark skies for the sun. If a track should forewarn a hiatus, it should be this. Though let’s not hope that is the case, as I reckon ENSLAVED has much more brilliancy to deliver. One of the darkest tracks the band so far has made, I like the doomy atmosphere it invokes, a very intelligent and well executed set up, and a very lasting song, it contains to resonate inside the head for hours after it stops, that is how to make music! I had no idea that this EP was about to be released, so a nice surprise and yet a quality offering from the Norwegians when it saw the light of day. 4 tracks of mindblowing music and an intermezzo that does good for the set up. Now let’s get on to yet a full length, it seems like the band is on a creative run. More info at: www.myspace.com/enslaved and www.scionav.com.