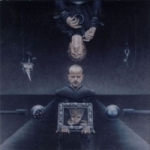 I never considered myself a big ENSLAVED fan, but at least always respected them for what they did, especially in their early days. Due to that increasing disinterest in their music, you can certainly imagine that I didn’t check out all of their latest stuff… and that almost resulted in a shock when I listened to “Monumension” now. I still remember them as a Norwegian Viking Metal band, a forerunner and originator of that genre, but ENSLAVED anno 2001 is a completely different band now. Unlike many other acts they at least still sound quite heavy, but there’s also a lot of new influences in their music, especially heavy psychedelic elements. I never listened to the much hyped KYUSS or MONSTER MAGNET myself, but from what I’ve read I could imagine that ENSLAVED incorporate similar influences these days. The label info talks about “… larger than time-dimensioned arrangements, savage brutality, uneartly doom and epic melancholy; it is all bound together in a web of creative madness…” – which sums things up pretty good in my opinion. Even though ENSLAVED recorded the album in Grieghallen Studios with producer Pytten once again, you won’t recognize it, as even the production sounds quite different to what we usually get from there. And to confuse you even more, I gotta tell you that the album features guest appearances by Trygve Mathisen (a member of the legendary Norwegian folk viking band YM-STAMMEN) and Dennis Reksten (who’s said to be “Psychedelias grand old man” in Norway and also a member of the rock band EL-REGN). This is certainly over the top creativity, but I’m not sure whether people (especially old fans of the band) will already be ready for it or not. So, you better be open minded if you intend to check this one out!