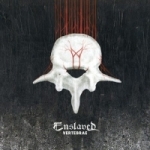 I hate ENSLAVED. No, really. If I’m not mistaken, "Vertebrae" is already their tenth longplayer, not counting the now legendary "Hordanes Land" and "Yggdrasil" – splits and I own or at least at some point owned nearly all of them, except for "Monumension" and "Ruun". That’s quite an amount and usually if I spend that much time (and money) on any artists work it means I pretty much love the fuck out of it, worship the protagonists unconditionally and at least think about naming my children after their records (by the way, would "Omnio" be more suitable for a boy, a girl or a hermaphrodite?). But when it comes to ENSLAVED, after all these years I’m still not sure to which degree I actually like them. Think it’s got something to do with them being the "masters of the opening track", as someone so aptly put it in some forum I’ve read the other day. If they’re ever to release some kind of "Best-of" they will simply have to put all their album-openers in a row, resulting in probably the finest hour of Norwegian Metal ever. Unfortunately, they are usually not really able to keep the extraordinaire standard set by the first track throughout an albums worth. This is however not the problem with their newest offering. Not because it’s that great for the duration of the whole record, but simply because it’s miles away from the awe-inspiring heights of a track like ‘As Fire Swept Clean The Earth’ for 50 long minutes. Instead the above lamented inconsistency plagues almost every single one of the eight tracks on display. Take ‘To The coast’ for an example: it starts with a highly intense and moody passage (the earthy and warm sound really works wonders here) that evokes perfect visions of the rising northland like very few are able to create, but looses all momentum due to lame seventies-prog-riffing and annoying vocals that are a far cry from the grandeur that made ‘793’ the crowning achievement in all things norse and Viking. While we’re at it: the massive Prog-Rock element is probably my main concern here, everything these wankers back in the seventies created is error for the gospel sayeth ‘Let there be rock’, not ‘Let there be endless improvisation, drum solos, classical adaptations and strange timings, so all may know you’ve done your homework’. What makes it so frustrating is the fact that ENSLAVED have proven often enough that there can be true inspiration and magic in what they’re doing. ‘Reflection’ and ‘Center’ would be the prime examples on their latest (the album is actually getting better towards the ending, at least something), but taken as a whole the record is destroyed by too many parts that seem to go nowhere or ruin the flow. The most reviews I’ve read so far are praising this to no end, but although I’d really love to believe the hype I can’t for the life of me see why. What remains is my firm opinion that a band like SOLSTAFIR embodies everything that ENSLAVED tries to be nowadays and I’m pretty sure that if "Köld" is ever going to see the dark of night it will simply blow "Vertebrae" into oblivion. Place your bets… www.indierec.no