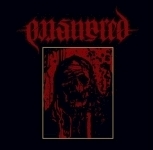 These guys from Sweden are around for quite a while now. Started under the way cooler moniker GRAVEHAMMER in 2005, they changed their name after five years, one demo and one vinyl 7" to ENSNARED, derived from the title of their EP, "Ensnared In Dismal Blasphemies". Along with the name, they also changed their line-up and musical style a little bit. Roughly produced old school Death Metal with a touch of blackening gave way to still raw, but yet more blackened thrashing old school stuff with a feeling for anti-modern riffing. They released an untitled 3-track demo tape with the new, slimmed down line-up. Now, with only two original GRAVEHAMMER members remaining (guitar player and singer D.Ö. left the band after the demo recordings), ENSNARED offer their first release with the newly completed line-up, featuring Master Motorsåg from BESTIAL MOCKERY on vocals, who meanwhile left the band again. This offer is entitled "Ravenous Damnation’s Dawn", a mini album that features four tracks, three of them completely new. The opener ‘Adorations’, a re-recorded song from their demo, tramples the listener under hoof with a quite Death Metal styled beginning before the song ends up in a doomy, pretty black sounding finish with barely distorted guitars. Following is ‘With Roots Below’, that is even more rooted in the blacker Metal, particularly of the 1990s, mixed with the vibes of old school European Thrash. The chaotic sound thus created runs the listener down and captures the ear. Next up is ‘Kimiya Ye Al Molekhat’, that follows the same beat. To me this one is the weakest song here, since it comes along a little exchangeable with nothing that really strikes me down. Somehow it seems to me like I heard it all before. But the final nine-minute epic ‘The Hungry Darkness Of Death’ compensates for this weakness twice. An oriental influenced intro leads the way for a blackened inferno that somehow screams: "Speed Metal!" to me. The riffing, the drumming, the breaks, the feeling – it all reminds me of this nearly forgotten genre of my youth. But ENSNARED spice a fine Speed Metal cocktail with their personal ingredients, like their typical hoarse vocals and blackened guitar parts, not to forget some really POSSESSED guitars and a few melodies that reminds the listener that these guys are from Gothenburg. ENSNARED couldn’t have chosen a better song to end this mini album in an exquisite way. Asides from the vinyl version, "Ravenous Damnation’s Dawn" is also available as a CD with two extra tracks (the above mentioned playing time refers to this version). These are the other two, not re-recorded songs from the demo ENSNARED released in 2011. Obviously they come along different, but I haven’t expected that much of a difference here. In ‘Fields Of Resurrection’ there are a lot of MORBID ANGEL vibes present along with a Black Metal feeling. And ‘Baneful Blood’ is much more Death Metal than the other tracks here. If I didn’t knew better, I would have thought this song was from a forgotten early Death Metal gem from the late 80s, early 90s. The song even sounds like it was recorded back then. These two extra tracks make it a little harder to force ENSNARED into a stereotype, but this is fine with me. So, if you are not interested in stereotypes, check: www.facebook.com/pages/ensnared-swe/147726878607702, or the label site: www.nuclearwinterrecords.com