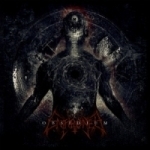 Long-running Belgian Black Metal horde ENTHRONED keeps on pushing forward with its horns sharpened, ready for a new attack again. The band’s 9th studio album in order, titled "Obsidium" – and the first one for Polish Agonia Records, is actually a quite frenzied and thought out package of well produced Black Metal – obviously not only satisfying the ENTHRONED fans around the world but also the fans of aggressive, varied and sharply played Black Metal in general, I would say. As far as the line-up of today’s ENTHRONED is concerned, I guess it should be mentioned that since Sabathan stepped aside from the ENTHRONED troops in 2006, there’s no original member left in this Belgian – sort of ‘kvlt-ish’, Black Metal act any more. However, Nornagest (also in THE BEAST) who took his place as lead vocalist and guitarist, has kept ENTHRONED going with his other 3 comrades in the band, trusting firmly the same viciousness and unrelenting powers of evilness by releasing 3 albums thus far, off which "Obsidium" – in my humble opinion, is absolutely the most entertaining and satisfying record from this line-up content-wise. Even if there’s lots of blast beat driven moments within their songs on "Obsidium", churned out the way bands like MARDUK or DARK FUNERAL are used to sow around on their smoking, pitch-black releases constantly, the guys in ENTHRONED are also smart enough to pay attention to slower – somewhat unorthodox passages in their song structures that as a matter of fact, have this pleasing tendency to bring out the best sides out of ENTHRONED. I need to admit I really do enjoy them most when they switch their songs into that mode, truly proving something about the great musicianship that this band has got. So, having said all this, "Obsidium" does contain some of the best elements of today’s Black Metal that a Black Metal record could have in the very first place. It entertains you, it thrills you – and it just proves loud and clear that ENTHRONED still have something to give for their fans. More at: www.enthroned.be, www.agoniarecords.com