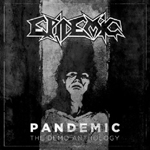 Once upon a time around 1989 – 91, Bay Area Thrashers EPIDEMIC were regarded as the hottest unsigned underground band and no wonder why – their demos "The Truth Of What Will Be" (1989) and "Extremities" (1991) were featured and praised in almost all dedicated fanzines and distro lists and the band appeared to be destined for big things to come. I personally heard them for the first time on their Metal Blade Records debut album "Decameron" released in 1992 and honestly it hasn’t blown me away. I remember really trying to get into them, because of their sheer underground credibility, but that cassette was more often gathering dust than being played in my stereo. In 1994 Metal Blade released their second album "Exit Paradise", but it didn’t do too well and the band split up after that. So fast forward 20 years and Divebomb Records comes forward with this "Pandemic: The Demo Anthology" release which combines both aforementioned demos plus their debut one called "Immortal Minority", all remastered with a 16 pages booklet and so on. So let’s see what the fuss was all about and were they really as good as those fanzine editors were saying back then? It starts with 9 tracks from "The Truth Of What Will Be" which immediately sets off in the chaotic, fast Thrash Metal fashion with prominent clangy bass and shitload of riffs piled one after another without any groove, breathing space and catchiness whatsoever. Add to this fast spewing, Hardcore-ish vocals and you get the basic idea. All songs are like a whirlwind of interspersed riffs, rather formulaic and boring but fast drumming, and manic half shouted / half babbled vocals. The "Extremities" demo leans on a heavier sound and some Death Metal influences have crept in, especially in the vocal deparment. It is meant to give an idea of fast, technical Speed / Thrash, but upon closer examination it just sounds rather incoherent. No way you gonna be humming any riff or melody and let alone a chorus in your head after hearing a complete collection of demos. Lastly included is their debut demo "Immortal Mintority", it still sees the band searching for their style and sounding more Thrashcore than anything, with one of those "joke" tracks which were popular back then, as to show that guys had a lighter side to them. So while listening to this, I wasn’t very surprised that they hadn’t made it any bigger, even despite the fact that 1992 – 1994 wasn’t the best of times to play Thrash Metal. Time puts it all in perspective and this material cleary shows that their songwriting abilities were pretty average at best and the only edge they had over others were this instantaneous bursts of energy and fast shredding, but that gets boring pretty fast, too. Anyway, this release is geared more towards those fans who were really digging them back in the day, so I guess they’ll be able to sell 500 copies or so. Also, if you happen to be fixated on the bands like CRYPTIC SLAUGHTER, WEHRMACHT, SADUS or DARK ANGEL and like the mushy sound of Speed / Thrash as it was in the beginning of 90s, then it surely is a good idea to check the EPIDEMIC out. I for one prefer DEMOLITION HAMMER and EXHORDER, two bands who got Death / Thrash and Speed / Thrash mix right in my opinion (well, opinions are different and I personally always loved EPIDEMIC’s furious outbursts of speedy aggression a lot! So to me this compilation is really a dream come true and definitely worth every cent! – Frank). www.divebombrecords.com, www.facebook.com/divebombrecords