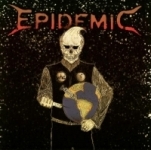 EPIDEMIC
The Man That Kills Himself
(self-financed)
12:45min

Getting back to giving Metal Maniacs more shit. I finally have figured out the rest of that confusing fucking review that EPIDEMIC just received in the Metal Maniacs’s latest issue for this band’s prior demo CD "Earth Penitentiary". Where in the body of the review the writer goes on some awful trek into black webbed memories of the past where he mentions an old Relapse Records title. The Dance (Disco?) / Grind psychos called PEOPLE that happened also to be from Israel and tried to compare them to EPIDEMIC, yet conversely went against his own description of EPIDEMIC’s (albeit now as the band seems to have added more influences to their songs) nail biting sound. Not more than four lines up at the start of his insipid review where he then also went on to say that this band had enough Middle Eastern influences within its musical repertoire to satiate the quote unquote "Been there done that crowd" (…Pause…). I’m sorry…What?! What the fuck is this dude talking about?! Then it hits me. He isn’t talking about the demo he was writing for. No not "Earth Penitentiary" no, fuck no, this malformed earthborn instead was trying to convey in a rather messy and crude manner, his thoughts on this two-song single entitled "The Man That Kills Himself " and tried to pass it off like no one would know what was happening. Oh well fuck! Now…It’s as clear as a day after a rain! Thanks go to you douche bag! ‘Cuz god-dammit if I couldn’t figure out what in Hell your pathetic, all knowing, authoritative, psycho-babble review was trying to tell me. Thankfully as I am aware of who NILE are, I am some what accustomed to deciphering cryptic fucking hieroglyphic text. And how lazy are you anyhow? Didn’t want to write two reviews for the same act? Even though you most likely received two discs, just as I have, today. What a rip-off! Do you know how expensive CDs are to make? And then mail out? Promos are free to you but are not free for the band. And your less than half-ass attempt at a review here is just abhorrent and definitely not an even trade for what was sent to you. May I remind your retarded ass that what you type for Metal Maniacs should mean more than the sixty seconds you obviously give your reviews time for, as your idiocy is not just confined to your shitty workspace but is in fact pressed into the tens of thousands of color copy each edition! Contact: Vova Kashirin, 12/11 Hamagenim St., 22448 Nahariya, Israel or epidemic.mailband@gmail.com or www.epidemic-online.com or www.myspace.com/epidemiconline