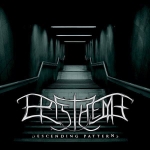 The first album from Italian five piece EPISTHEME gives me a boot back in older days. Those days are the second half of the 1990s, when a lot of Progressive Metal bands came to light that no one really remembers right now. In the wake of then pretty successful DREAM THEATER, bands like SOUL CAGES, VANDEN PLAS or VAUXDVIHL released their first albums and established bands, PSYCHOTIC WALTZ and FATES WARNING for example, had their second spring. All these bands tried to lead Prog Metal into the new millennium, but they became forgotten and buried by time and dust soon or split up before. The common denominator of these bands was the fact that they watered down their sound so much, they hardly couldn’t be called Metal anymore. Instead they could be categorized as hard Prog Rock, including the problem that was typical of the genre: the music was labelled “progressive”, yet it didn’t serve the true meaning of the word. Most of the bands of the end of the 1990s were forgotten for a good reason, since most of them were generic in their efforts, sounded sterile and therefore remained absolutely redundant. Even legendary FATES WARNING dug their own grave with overachieving albums. But what the heck does all this have to do with EPISTHEME? Well, “Descending Patterns” would have fitted perfectly in these times, despite the fact they added a few ingredients of modern progressive Metal bands like OPETH to their sound. Sadly these don’t make the album much more exciting. The seven songs are plodding along in the swamps of mid tempo boredom most of the time, garnished with a few better moments like the Power Metal part in ‘Blind Side’. Well, if you’re still digging the aforementioned bands, you might check out EPISTHEME: www.epistheme.it, www.facebook.com/epistheme